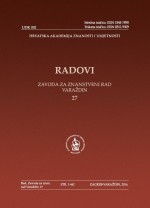 Summary/Abstract: The first association, when talking about noble families in Međimurje, no matter if you are historian or just history enthusiast are Counts Zrinski. Zrinski were great heroes of Croatian and Hungarian history and they made Čakovec their primary possession. But it should be said that after the stabilization of border with Štajerska, Međimurje was home to many prominent and wealthy noble families from Hungarian kingdom. Throughout this Thesis we will analyze faiths of these above written noble families that had their assets in Međimurje. First such noble family was kindred of Haholds. They are responsible for stability in Međimurje. In their time, documents mention indigenous nobility of Međimurje, royal border guards or “iobagioni castri”, who entered into conflict with newcomers and after that, apparently, in their service. We will see that one of the members of this family is responsible for giving name to center of this county. In the last quarter of 13th century, border area was again destabilized and desolated. In that time, Međimurje fell into hands of captain of Štajerska. After the year of 1328 it is returned to king of Hungaria and seigniory was apparently in bad shape. New owners of Međimurje were family Lacković. They claimed their right to Međimurje in the year of 1350. In Croatian history, family Lacković was best known because of their conflict with king Sigismund which ended with famous Bloody Parliament in Križevci when Stephen of Čakovec was killed. After the family of Lacković new owner were family Sečenji which are derived from Croatian noble family Kačići. They did not stay long on this area.For the most part of 15th century owner of Međimurje are family Celjski and after them, their captain Fridrik Lamberg. Last analized noble family are Ernušti and with them we finish this analysis of rather interesting medieval history in Međimuje.