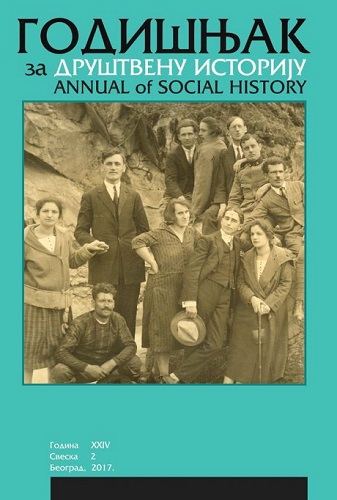 Summary/Abstract: Results of modern historiography point out the significance of economic and political elite, military structures and distinguished individuals, as well as foreign political influences in crucial events in February and March of 1917: abdication of Emperor Nicholas II, collapse of the Russian Empire and the end of the Romanoff dynasty. In the Card Register of the Citizens of Belgrade and Zemun 1924–1950 preserved in the Historical Archives of Belgrade, we have found certificates of permanent residence of prominent individuals from military and political elite of Imperial Russia. New information complement already known details from these emigrants’ lives and are very important for complete perception of their family relations and structures within emigration community. High percentage of number of cards found in the Card Register belonging to individuals involved in the events of 1917, indicate that it is possible to advance research of the Russian emigration history. Card register of the Citizens of Belgrade was organized for the first time in the moment when the number of Russian emigrants was on its peak; in the middle of 1920s there were about 10.000 Russian emigrants. Parallel to this, this is the period in which amount of previously available archival material produced by emigrants’ institutions and government’s offices in charge of the emigrants, rapidly diminish, making impossible to the researchers to reconstruct completely all relevant processes important for comprehension of history of Russian emigration. Use of the abundant Card Register of Belgrade citizens preserved in the Historical Archives of Belgrade would be more facilitated if the Register is digitized and organized in a form of searchable database, and would certainly offer a new perspective to the researchers of Russian emigration.