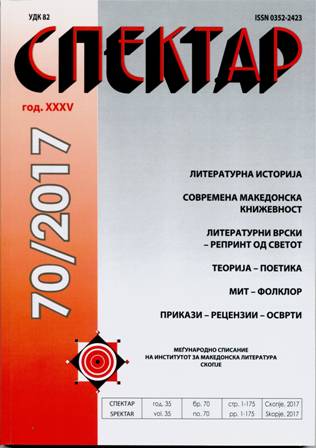 Summary/Abstract: This paper aims at representing affective theory as one of the newer tools in the field of cultural studies, history, and political science that focuses on non-linguistic forces, that is to say affects. The text starts with the basic premise that affective theorists position, namely that affects cannot be socially constructed, thus representing an opportunity to discontinue the reproduction of the given normative and move towards another alternative. The text makes a distinction between affective science and affective theory, thusly it distinguishes between the two semantic meanings of the term affect. Establishing the influence of psychoanalysis (mostly Tompkins and Deleuze), the text offers an overview of the most influential positions of Eve Kosofsky Sedgwick and Brian Massumi, as affective theory’s first proponents. The key arguments attributed to post-deconstruction are being examined, namely, a doubt in the capacity of the post-deconstructivist model of the subject to explain holistically the position of the individual or of groups in the world; a doubt in the capacity of quantitative empiricist approaches and a textual analysis of post-deconstruction so as to reveal a complete resonance of a social world that aims at self-understanding; a doubt in the abilities of binaries such as power/resistance and public/private to fully explain political processes. These doubts are highlighted with the aim to address how affective theory can offer common analytical tools and how highly individualized and social contact zones - bodies and histories - can write their own materiality in space (the understanding of incarnate realities). Henceforth, affecive theory speaks about how power systems circulate within bodies. The text offers its analysis of the political aspects of affective theory, by examining closely Sara Ahmed’s The Promise of Happiness and Lauren Berlant’s Cruel Optimism.