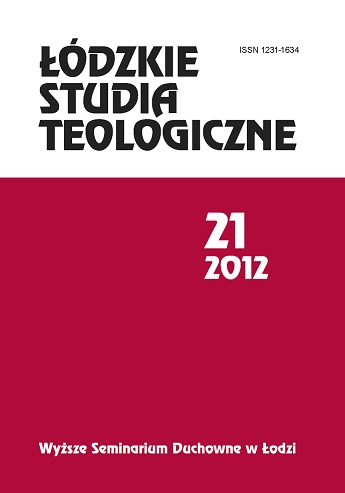 Summary/Abstract: The article takes up an issue of a Divine grace in a contemporary theology of the Canadian theologian, Bernard Lonergan. It is a phenomenologically-transcendental attempt of formulating the reality, where instead of the traditional theological ideas the new concepts appear, that refer to a human experience of love. In this way, Lonergan wants above all to point out, that the grace is a relation of persons, wherein the love as a gift originated from a free initiative of God becomes through a response of the man, a link creating a relationship and going beyond the man himself towards the others. That is why, Lonergan accepts the love between the people as a pattern for the grace, since he wants to explain how the man, living in the grace, acts, behaves and affects the others. As a definition of the reality of grace, Lonergan uses an expression: being-in-love-with-God, and in the first place he indicates what the man accepts from the outside thanks to the grace, to exhibit afterwards what he passes on further, being himself in the state of grace.