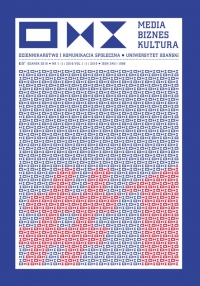 Summary/Abstract: The subject of the thesis is the issue of the trivialization of the concept of feminism in the segment of luxurious women’s press. As a starting point the author adopted the phenomenon of negotiating the meaning of feminism in the media. The thesis was investigated at an angle of feminist discourse (understood as a way of using the language) trivialisation in Poland. The aim of this study was to describe the indications of post feminist discourse forms: latte-feminism, pop-feminism and girl power and to detect the connection between them and a particular press title (‘Twój Styl’, ‘Wysokie Obcasy’, ‘Wysokie Obcasy Extra’ and ‘Cosmopolitan’). In the course of the thesis definitions of forms of post-feminism – previously unheard in academic work – were developed. The study was based on content analysis that showed the most important trends, used later to critical discourse analysis.