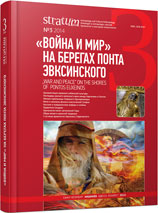 Summary/Abstract: The article studies coinage of the ancient Greek town of Tyras, which was situated on the Bank of the Dniester estuary, particularly the urban issues of 4th — first half of the 1st century BC. The аuthors believe that the beginning of coinage in the city falls on the 70s of 4th century BC. The beginning of minting silver and copper coins was carried out independently from each another, and took place around the same time. The early stage of minting ends in late 60s of the 3rd century BC and approximately coincides with the devastation of the Greek rural settlements from the Dniester estuary and around Tyras. Late stage of coinage in Tyras begins a few decades later and is characterized by the emission of exceptionally small copper coin denominations. The repertoire of images on the coins is diverse. Most often depicted are Demeter, Athene and Hermes. Small copper coins had been minted sporadically until about 60s of 1st c. BC. The last cooper issue with a typical image for Mithridates's time — an eagle on bolts of lightning — date to app. 63 BC.