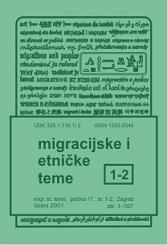 Summary/Abstract: Emergence of a new Russian ethnic and national self-consciousness in general and foreign policy in particular was a very contradictory process in 1990s. The author analyses both the theoretical and the psychological basis of the Russian Federation’s foreign policy in the first period of the country’s existence as an independent sovereign state. First he deals with its connection with the internal political struggle; second, he explains the connection between the traditional components of Russian and Soviet consciousness – the Slavic Idea and the process of national (civil and ethnic) self-determination. The Slavic question in the 19–20th centuries was an integral part of the conception of so-called “special development” of both Russia and the USSR. In order to restore “the Great Soviet Union” Russian communists exploited this conception at the end of the 20th century. On the other hand, Russian nationalists inherited Stalin’s mythology from the Cold war period. Russian liberals and reformers did not succeed in formulating a new well-grounded conception, or in consistently implementing it. Hence, reformers, communists and nationalists analysed events in post-Yugoslav area and offered possible solutions and plans for Russia’s political activities, based mainly on myths, stereotypes, illusions, ethnic and political prejudices, but not on real knowledge and understanding.