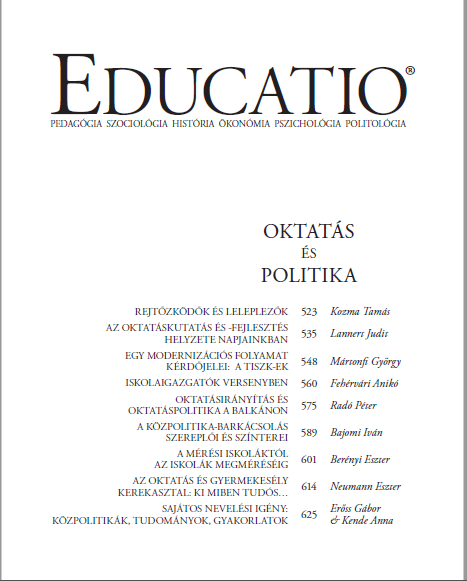 Summary/Abstract: The author – who is also the editor of this issue – presents findings of the synthesis report that summarizes the case studies elaborated within the framework of the “Know and Pol” European research project. The cases studies provide us with an in-depth analysis of public policies that have recently occurred in the education and health sectors in eight European countries, with special regard being given to the role of different degrees of knowledge and knowledge holders in the policy making process. The research utilized the notion of public action that underlines the participation of numerous actors in the elaboration of public policy. However, the author emphasizes that the analyzed public policies were initiated and carried out by different governmental institutions. Nevertheless, in one case a political reform emerged from the political agenda after a series of media events generated by parents and researchers focusing on the educational integration of children with special needs. It became evident from the case-studies that the bricolage of policy frequently relies on borrowing from across countries, this being facilitated by idea-brokers (researchers, civil-servants or politicians). The author stresses that from the perspective of the success of such borrowing, the adaptation of foreign models to the national context is a crucial issue. The last section of the paper describes how key actors in the political field gain much freedom by constructing new and different scenes (reform commissions, consultative bodies, etc.), which give a possibility for participating in the policy making process to a wider range of actors (civil servants, researchers, delegates of pressure groups, etc.). In the case of the two analyzed educational public ‘actions’ in France and Hungary – which we should see as a genuine “Coup d’Etat for modernization” – the creation of new bodies enables one to move beyond the traditional group of policy-making actors. Yet a Belgian educational case study shows us that in the context of “consensual” democracy pressure groups delegates are naturally included in the work of the new, important bodies (steering committee – Comité de Pilotage).