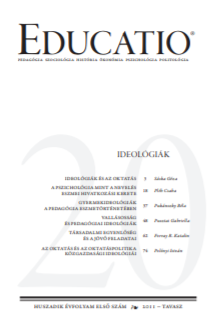 Summary/Abstract: Csaba Pléh, in his work entitled Psychology as the Theoretical and Referential Framework of Education, departs from the competing images of mankind as a starting point of reference in 20th Century psychology. In this essay, one of the recurring themes is the relationship between human malleability and the plasticity of psychological thought. The flexible conceptual reference framework for development appears in more optimistic societies, such as via American behaviorism and the Pavlov cult of Soviet psychology, which are believed to have developed themselves within the time span of one generation. The other side consists of nativist perceptions, things which have been strongly revived since the 1970s. One of their variations, which highlights the genetic origins of individual differences, ties up with rule-based conservative perceptions; the other variation, which promotes universal innatism, as coined by Chomsky, stresses the unified potential for the development of humankind.