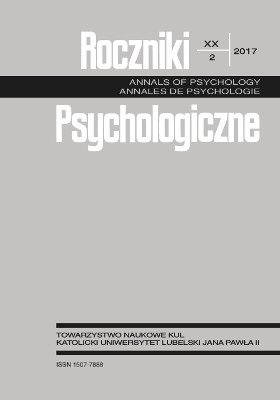 Summary/Abstract: The aim of the paper was to characterize personality disorders in terms of the dimensions of the Circumplex of Personality Metatraits (CPM) developed by Strus, Cieciuch, and Rowiński. It was expected that personality disorders characterized by the profiles of traits from the five-factor model of personality (FFM) would be located in the sector delimited by poles Gamma- and Delta- and including pole Alfa-. The author analyzed data collected in a sample of 2,284 subjects tested by means of the NEO-FFI and three other instruments: the Personality Beliefs Questionnaire, the Structured Clinical Interview for DSM-IV Axis II Disorders (SCID-II), and the TALEIA-400A questionnaire (Test for AxiaL Evaluation and Interview for Clinical, Personnel, and Guidance Applications) for the assessment of personality disorders as well as compared them with the data from the meta-analysis by Saulsman and Page (2004) concerning the relations between personality disorders and FFM traits. The obtained correlations confirmed the research expectations. In Discussion, the author points out the heuristic value of the CPM for differentiating the norm from pathologies, which includes the differential diagnosis of personality disorders.