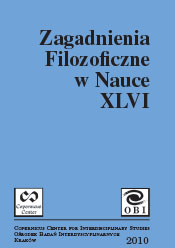 Summary/Abstract: The Assayer of Galileo Galilei is a classic of Italian literature. This is not only because of its formal qualities - in fact The Assayerbelongs to the most important current of Italian literature, which aims at drawing the map of what people know and what people do not know (I. Calvino). The Assayer was written in the context of the discussion on comets, and responds, paragraph by paragraph, to the Libra astronomica ac philosophica firmed by Lotario Sarsi (the pen-name of Orazio Grassi). Many authors have commented this book, so important for the methodology of modern science, and Galileo's rhetoric was always indicated as one of the most significant components of this 'opera'. From the formal (i.e. rhetorical) point of view The Assayer is an example of the judicial, defensive speech. Nevertheless, in the book one can notice the presence of the epideictic speech, to which belongs the famous tale/apologue of sound. In this essay a rhetorical and narratological analysis of the apologue in question is proposed. Different interpretations of the tale are discussed, and the special attention is paid to the argument attributed to the pope Urban VIII. The tale seems to be the founding narrative of the way in which the scientist confronts himself with the nature - the point which A. Banfi expressed in his conception of copernican model of man.