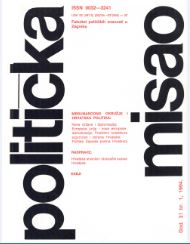 Summary/Abstract: The author shows how Fichte’s concept of the nation, although modern, originates in a long philosophical tradition that postulates the importance of the community above that of the individual. Fichte’s original philosophy of humanity, inspired by enlightenment and especially Kant, he later transferred to the abstract ethical unit of nation. In it, the concept of humanity (later ’nation’) is the most general community towards which the individual aspires to become a member because of his longing for the absolute. The general understanding of nations transforms into Fichte’s later philosophical hypostasis of the German nation. According to Fichte, only the German nation, as a community tied by a “living language” has general human importance and a world historical mission to be accomplished in the future. The German nation, however, must become a dynamic unit through elevating its people above political and social divisions. This occurs through the education of individuals for love of the nation, based upon “true” philosophy (Fichte’s philosophical teachings). The author concludes that the concept of a nation in Fichte’s later works (in which the relationship between the individual and the state is an educational dictatorship and the complete destruction of individuality) creates a fertile ground for totalitarian, nationalistic ideology.