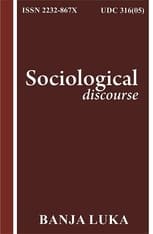 Summary/Abstract: This paper analyzes the problem of paradigm and discourse in contemporary sociology. Problems of delays in paradigmatic development of modern sociology manifested as ignoring or running away from the paradigm and the urge to declare "low" theoretical discussion and "minor" issues of a paradigm or "grand theory" are considered. Special attention is paid to the order of paradigms in sociology as a science, about the great impact of relativism, constructionism and deconstruction of common sense in establishing and developing the contemporary conceptual sociological paradigm. It is noted that the most of the problems in contemporary sociology come from the discourse about the crisis, a lack of understanding of its role and importance in sociological theory, as well as the conversion of the discourse into the paradigm.