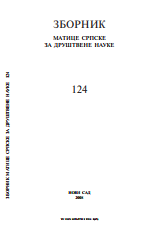 Summary/Abstract: Dubrovnik was a cultural and the Serbian Primacy in Bar the religious centre of the Serbs catholics. The newspaper Dubrovnik expressed the views of the Serbs catholics. The owner, publisher and the editor was an old national activist Kristo P. Dominković, and main collaborators were Božo Hope and Jovan Perović. The newspaper underlined that it followed Dositej Obradović in his opinion that the ethnic origin and language were more important than religious affiliation. On June 15, 1939, on behalf of the Serbs catholics, Luka Bone, Božo Hope and dr M. Gracić from Dubrovnik sent to the archbishop in Bar and the Serbian primate, dr Nikola Dobrečić, a letter about the need to create the Serbian catholic theological school in Bar. They pointed out that the theological school was necessary both to the Serbian nation at the Coast and to the catholics of the prewar Serbia, Montenegro and Vojvodina. Due to dr Nikola Dobrečić's endeavour, on June 20, 1935 the Archbishopric Seminary of the Serbian Primate in Bar was opened. In the Cvetković-Maček agreement from August 26, 1939, Dubrovnik was separated from the Zeta District (banovina) and allocated to the newly-created Banovina of Croatia. There began the persecution of the Serbs, the Yugoslavs and Yugoslav-oriented persons in Dubrovnik and its vicinity. The coup on March 27, 1941 caused great enthusiasm in Dubrovnik. Everything that happened in Dubrovnik and its vicinity, in Banovina of Croatia, was an introduction to everything that happened in The Independent State of Croatia. Those who ran away from the Croatian Ustashas took refuge in Boka Kotorska.