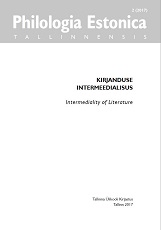 Summary/Abstract: The article examines the links between digital literature and digital humanities, as well as various definitions and periodisation of digital literature. Digital literature is ‘digitally born’ literature, created and studied since the end of the 1980s and largely defined as a work with an important literary aspect that takes advantage of the capabilities and contexts provided by computer technology (e.g. hypertext literature, multimedia poetry, interactive literature, etc.). In the periodisation of digital literature, two generations have so far been differentiated (late 1980s until 1995 and from 1995 until today). The article adds a third generation to this periodisation, starting from2006–2007 and linked with the development and spread of social media platforms (Twitter, Facebook, Tumblr) and smart gadgets.The article defines the third generation of digital literature as literature created via social media (including so-called Alt Lit literature), characterised by its democracy, dialogue between participants, textual and narrative dynamics, and mixing of various forms of media. In addition, it is suggested that this type of literature can be associated with post-postmodernist literary trends. A closer look is taken at the work of Estonian authors Kaur Riismaa, Liina Tammiste and Keiti Vilms, who have all used social media platforms (Facebook,Twitter). The article discusses whether these authors can be associated with the term ‘Alt Lit’. The conclusion reached is that several of the features of Alt Lit can be ascribed to the texts and activity of Riismaa, Tammiste and Vilms; Alt Lit features seem to correspond best to Vilms.The overall conclusion of the article is, however, that the content and essence of digital literature does not so much depend on the will of the authors, creative impulses or inner-literature movements, but instead on the development of computer technology. Thus the definitions of digital literature are dynamic in time and depend on the technological solutions that are emerging in a given period and the types and works of digital literature these new technologies can inspire.