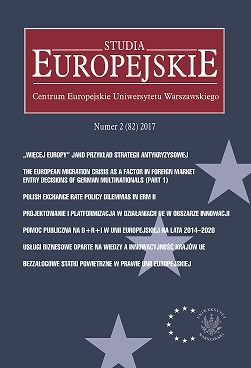 Summary/Abstract: The author examines the role and effectiveness of the “more Europe” approach to the crisis in the general area of politics (in wide terms), and in relation to the crises in the European Union (in narrow terms). Assuming that the crisis is a perceived situation (coming from the field of perception), and not an objective and scientific set of data, the author tries to assess the actions of policy-makers and show what effects they cause. Referring to the postfunctionalist theory, it is shown in the article that “more Europe” means a strong politicization of the EU, which leads to the polarization – on the one hand, a stronger EU jurisdiction (based on output legitimacy), and on the other hand, the strengthening of national identities. Hence, the logic of technocratic and rational EU mechanism collides with the competition with pre-material values of the logic of identity. This is why the eurozone crisis, which was initially compatible with the logic of economic theories turned into a struggle for identity – with a role of the nation state and democracy in the background. The author concludes that the proponents of the “more Europe” approach do not realize the recently emerged conditions and contexts. Paying attention to the perception unveils that the strategy of “more Europe” can be counter-productive, because the decisions made under the pressure of the crisis may lead to even greater uncertainty and insecurity of those people affected.