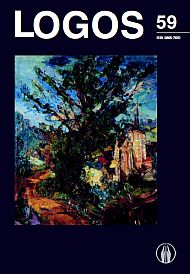 Summary/Abstract: This paper is dedicated to the interpretation of the works of Leonarda Jekentaitë (1946-2008), in which she analyses the views of non-classical philosophers. They speak about the reality and the human existence and the style of their writings is more artistic than theoretical. The first article is about the philosophy of Kant. Although it has been two hundred years since this thinker, the main ideas of his anthropology continue to be urgent, makes us to go back to the categorical imperative of Kant and rethink it in the epoch of jazz. The impact of A. Schopenhauer's philosophy is felt in the writings of contemporary French postmodernists, particularly in those of Gilles Deleuze. As most important among the non-classical philosophers is considered S. Kierkegaard. One of the most significant trends of Lithuanian art can be characterised using Kierkegaardan terminology, as demonic aestheticism. The force of expression rises from mental experiments and self-destruction which are signs of longing after the lost sense of the certainty of reality and faith in God. Interpreting F. Nietzsche's philosophy she emphasizes the uncompromising critique by him of the theoretical attitude to life and proclamation of the will to power. Nietzsche saw a descrepancy between two levels of consciousness in European mentality: the superficial level of Judeo-Christian virtues and Pagan values, authentic but condemned.