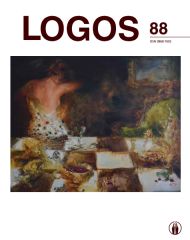 Summary/Abstract: Francis Bacon and Mark Rothko represent the totality of the range of modern painting: the first being the champion of figurative art, the second of abstraction. If we consider their vision of the world and human existence in their written and spoken words, we will discover a great many philosophical and poetical similarities. This is despite the fact that many works by Bacon have an evident and formal resemblance with the monochrome and blunt backgrounds which are the trademark of Rothko. The tragic origin of their works and vision of life sprang from the experience of violence and death. Such characterized their childhood during the years of the European wars, conflicts and pogroms that they lived first hand. They also felt the loss of the Myth type of media in modern society. A common literary background (Nietzsche and Aeschylus) was counteracted by their opposite vision of the meaning of life: a committed atheist Bacon, a man aspiring to transcendence Rothko.