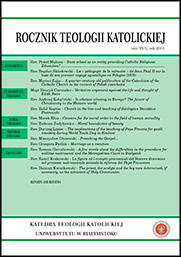 Summary/Abstract: The main purpose of this article is to analyze the deep extinction of Christianity in Europe and to present the possibility of continuation of the Christian religion in those societies that are largely atheistic or agnostic. Atheism is undoubtedly a great challenge for the future. In some countries, today you can see the vision of the reality dominated by an atheistic culture and its worldview. Extremely interesting remarks on Christianity and an atheism can be found in the writings of the German philosopher Karl Rahner (1904-1984) and French mystic Madeleine Sémer (1874-1921). In the work of these two authors there is extremely penetrating diagnosis of the modern times and the prospect of transformation of the Christian religion in the Western world.