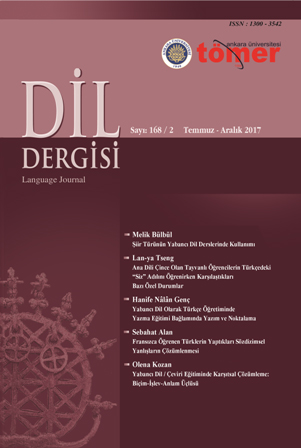 Summary/Abstract: The article deals with the contrastive analysis based on the triad of form-function-idea and highlights the applicability of the approach as for Turkish-Russian language pair. A notion of ‘semantic consciousness’ aimed as a result of applying contrastive analysis is introduced and the importance of the notion in the foreign language education and translation training is underlined. Semantic consciousness aims at students’ comprehension of the beyond-the-language semantic ideas behind the grammatical structures and the ability of the semantic ideas to rearrange itself differently in different languages. ‘From idea to form’ approach applied ın the framework of semantic consciousness acquisition process is shortly introduced. Contrastive analysis of non-restrictive clause with ‘kotoriy’ in Russian and its functional equivalent in Turkish, known as an adjective clause, is provided as an example.