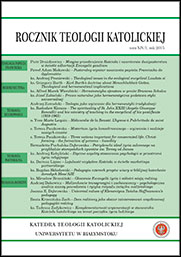 Summary/Abstract: The article is an attempt to read a philosophical load of prose by Bruno Schulz, a writer whose biography marked by the tragic experiences of the Soviet and Nazi totalitarianism is an example of an artist who was turned into a slave. In Schulz’s prose strikes the focus on the father and the son relationship, which is a reversal of the key projects of modernity paradigm of a slave and his master. The axis of the dialectic of Schulz’s father – son are parallel phenomena of presence and absence of the father. Schulz’s narrative fits into the biblical archetype, evokes the heritage of the Patriarchs (James and Joseph), raises the question about the source of being. The fact of renewing the birth, the flow of existence from one entity to the other makes the dialectic of the father and the son a core of anthropological thought. Bruno Schulz, regardless of his break with Judaism and agnostic attitude shows the anthropological significance of the vision of Genesis, according to which man owes its existence to the creative will of God. In Schulz’s prose we meet images of deformation of the source father – son relationship in various forms of authoritarianism: the family, institutional and political.