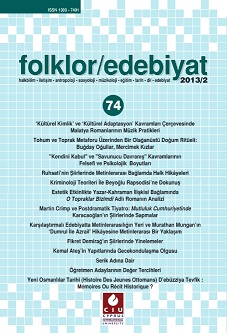 Summary/Abstract: The research has been formed in order to analyze music practices of Malatya Romanies within the framework of cultural identity and cultural adaptation concepts. Romany diaspora exists in many places of the world; additionally the homeland of those people is in the northwest of India. Therefore; the origin of Romany people, their general features and their situation in Turkey have been emphasized in the first part of that study and then it has been passed to Malatya Romanies in the second part of that study. It has been limited with only Malatya region in the study in order to get much more information across the region. Romanies have performed generally Romany music, Art music and sometimes types of West and Çigan music in the west. They have also added Turkish Folk Music, Arguvan and Pütürge Music which represent Malatya and arabesque in Malatya. However they have not settled down completely and actually in the east, they have got help from local musicians of Malatya especially for the performance of a plucked string instrument that is public instrument for adaptation to eastern culture. The music types which have been performed by Romanies in Malatya have shown an accurate distribution according to music places which have been divided into two main parts as ‘elite’ and ‘common herd’ in the study. It has been determined that Romanies who have performed more Turkish Art Music and popular music in the elite places such as restaurant and hotel, on the other hand they have vocalized generally folk music and arabesque as pavilion style in common herd places such as pub and pavilion.