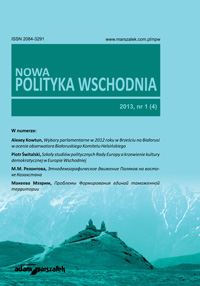 Summary/Abstract: The State Social and Political History Archive of the Russian Federation in Mos-cow include a very interesting document, dating back to April 1944. It is a state-ment made by Włodzimierz Sokorski, back then the deputy leader of the Polish 1st Tadeusz Kościuszko Infantry Division, addressed to the Soviet authorities. In a servile, obsequious form, he assures about his absolute loyalty towards the Sovi-et state and the communist ideology. He explains how comrades from the Union of Polish Patriots and the Central Bureau of Polish Communists falsely accused him of political assaults and wanted to throw him out of any power over post-warPoland’s fate. He guarantees his utter loyalty towards Moscow. This document is connected to the once famous argument among Polish com-munists about the shape of the post-war state, inspired by the announcement of the so called Theses no. 1. In that conflict, Sokorski stood against the majority of the Union of Polish Patriots’ leaders, presenting a solution for Poland as a vas-sal to the Soviets, with the army having the same political role as the communist party. Sokorski lost the case, but thanks to Moscow’s support, he did not leave the game yet. The Kremlin probably assessed, that he would be useful after the war. After a short quarantine, he came back to the so called first echelon of Polish communist authorities.I am publishing this statement along with accompanying documents found in an archive portfolio.