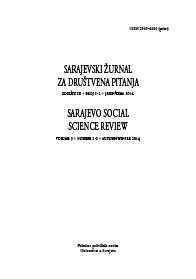 Summary/Abstract: The aim of this paper is to provide empirical and analytical framework for an understanding and contextualization of politics of child welfare in Bosnia-Herzegovina between the two world wars. Research results show that in normative sense extremely progressive and substantially high quality model of child welfare was in constant contradiction with the lack of financial, administrative and professional capacities for its implementation. Nonetheless, from a historical perspective , it is important to reevaluate the state 's efforts in the area of child welfare emphasizing particularly three legacies resulting from these efforts: first concerns the adoption of legislation on which the child welfare politics was based, second refers to the creation of (public) institutions responsible for the implementation of child welfare at local level and third concerns relationship of complementary between state institutions and private initiatives in the field of child protection based on the assumption that the state could possibly be the main but not the only and exclusive mechanism responsible for the provision of social welfare of citizens.