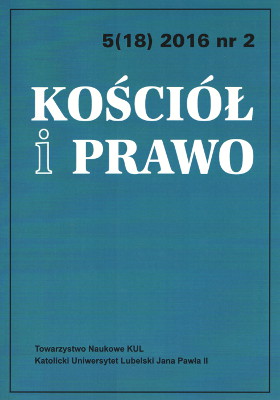 Summary/Abstract: As the original and fundamental gift, every human life is inviolable and sacred, that why from the very beginning demands its protection. This message is well built-in the standards of natural law as well as religious laws. From the very beginning her existence, the Catholic Church has been taking position to defend and protect the right of life for every human being. The right to life is not just a matter of belief, nor is just a religious law, but the most fundamental right of every conceived human being. In the moral order the commandment “you shall not kill” is the fundamental principle and standard of universal code of morality, which is written in the conscience of every human being. When the Church and the State defend the right to life also they have to be concern about every woman who conceived the gift of life and should be a handmaid of new life by the fact of conception and birth of a new person. As a consequence, human life of each person becomes the most valuable gift from God, especially for the family and the nation. Both the Church and the State need to be part of building the culture of life rather than the promotion of the culture of death because the culture of death can lead every civilization to fall into ruin. Rules and canonical discipline of the Catholic Church unequivocally defends the life of every unborn child, as well as promote the implementation of the Law which protect the right to life from the moment of conception to the natural death for every human being.