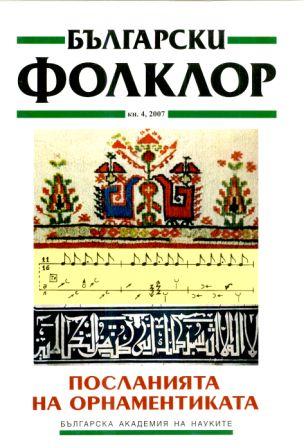 Summary/Abstract: This text focuses on some ornamental figures, characteristic mainly about the dialectic many-voiced folklore singing and the songs from Central Western Bulgaria. The specific ornamental phenomena, which appeal- in traditional many-voiced singing from the discussed region may be empirically perceived by hearing, but they may be also understood by established linguistic terms, concepts, phrases. The work presents the most widely used categories, which comprise the ornamental style, typical for the many-voiced singing from Central-Western Bulgaria. The Shopp musical ornamental style (Shopp - a peasant from Sofia Distiict - note by the translator) is indicated with words, which are used both in the circles of researchers and the carriers of the musical folkloric song tradition. Though they describe similar musical phenomena, the scientists and the singers express in different ways, but the ones do not exclude the others, they mutually determine each other, give proof and add to each other. The ways in which the bearers of the musical folkloristic tradition (the village women singers) and its researchers (the ethnomusicologists) discuss the ornamental phenomena, are summed up around several general moments, which structure the current knowledge about ornamental specifics in the singing practice in Central Western Bulgaria.