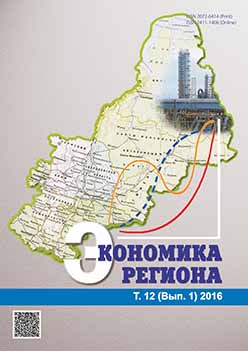 Summary/Abstract: Pacific Russia is considered as an aqua-territorial macro-region entering the Far Eastern Federal Okrug and its adjacentwater area within a 200-mile sea economic zone. The macro-region has the richest nature-resource potential of a dry land andthe sea, the possibilities to use the sea transport for communications of Russia and Europe with the countries of the Asian-Pacificregion. In Pacific Russia, two latitudinal zones are allocated: the northern and southern ones, consisting of the territories of theFar Eastern Federal Okrug of Russia. Combinations of activities by the subjects and by the latitudinal zones are considered asthe territorial structures of economy. The distinctions of these latitudinal zones by their socio-economic potential and the levelof development are shown. By the changes of homogeneous activities in the subjects and their ratios, measured in the sharesof the added cost, the assessment of the structural transformation of economy was carried out in the latitudinal zones from2004 to 2013. The tendencies of the transformation of the territorial structures of economy were revealed in the latitudinalzones. The greatest changes of the structures of economy occurred in the northern zone for this period. In the southern zone,the structural transformations of economy were a little less, except for Sakhalin. In this case, in both latitudinal zones, a shareof processing manufactures reduced and that of the extracting industries increased. The generalized assessment of the changesin social and economic efficiency (by increased personal income, labor productivity, profits) in correlation with the structuralchanges in the economy of the regions of Pacific Russia has been made. The authors note that an important premise for buildinga sufficiently sustainable system of interregional division of labor in Pacific Russia is the location of extractive industries andinitial stages of the manufacturing industry activities in the northern zone, while the major manufacturing industries andinterregional transport and logistics services are located in the southern zone. The article is intended for the experts and thestudents, interested in the problems of the development of the eastern regions of Russia.