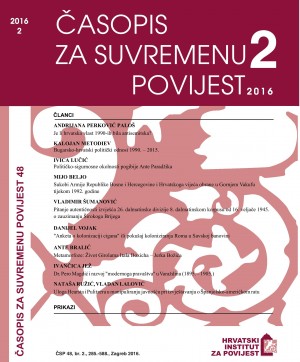 Summary/Abstract: The Romani minority population has been living in the Croatian lands since the second half of the 14th century and is today one of the older minority groups in the region. The Croatian government began regulating their nomadic way of life in the late 16th century, attempting to permanently settle i.e. colonise them on a certain area. In a way, the Croatian government was as (un)successful in this attempt as other European governments, primarily because they failed to approach the problem in a systematic manner. The question of colonising the Roma was considered one of the most important steps towards regulating their position in society primarily because it was believed this would resolve the matter of their (constantly highlighted) criminality. The authorities in the Sava Banovina were faced with this – until then unsolvable – problem. Due to increasing public pressure and the initiative of the Križevci town government, the question of Roma colonisation was placed on the agenda of the Sava Banovina’s civil services. A significant number of local governments answered the mentioned “survey” by expressing their support, though only a small number of them were willing to provide funding for its implementation. The government of the Banovina then presented the problem to Ban Ružić, who demanded further clarifications and the gathering of more data on the Roma. Although there are certain indications that a part of the budget of the Sava Banovina and later the Banovina of Croatia was set aside for implementing “Gypsy colonisation”, it should be noted that they most likely weren’t spent for this purpose since the colonisation never took place. The reason why a special provision was never enacted could be related to the lack of initiative and cooperation between state, Banovina, and municipal authorities. The government of the Banovina of Croatia also tried to resolve this problem – certain newspapers reported that a special law concerning the Roma would be enacted, aimed towards preventing their nomadism and constantly-highlighted criminal activities. When the Ustasha government came to power in the Independent State of Croatia, it implemented a radical solution to the “Gypsy Question” – instead of colonisation, the Roma were subjected to deportation and mass killings in camps.

Romi u popisima stanovništva iz 1921. i 1931. na području Hrvatske Roma in the Population Censuses of 1921 and 1931 on the Territory of Croatia 2004 Bilješke iz povijesti Roma u Slavoniji, 1850.-1941. Notes on the history of Romany people in Slavonia, 1850-1941 2005 Doprinos Franje Fanceva proučavanju povijesti romskoga stanovništva u Hrvatskoj The Contribution of Franjo Fancev to the Study of the History of the Romany Population in Croatia 2005 Izbor bibliografije radova o gospodarstvu Samobora Bibliography selection on Samobor Economy 2010 Političko-upravne prilike na području samoborskog kotara za vrijeme šestosiječanjske diktature (1929.–1935.) POLITICAL AND ADMINISTRATIVE SITUATION IN THE SAMOBOR DISTRICT DURING THE 6TH OF JANUARY DICTATORSHIP (1929 – 1935) 2013
2022 © CEEOL. ALL Rights Reserved. Privacy Policy | Terms & Conditions of use
ICB - InterConsult Bulgaria core ver.2.0.1201