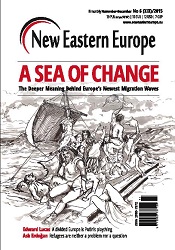 Summary/Abstract: In the last 15 years, Vladimir Putin and his team have succeeded in creating a well-oiled propaganda machine which targets those with “anti-Putin” views and sympathy towards the West. The negative rhetoric of the Kremlin’s mouthpieces has a significant effect on the public’s mental health, forcing the main victims of Russian propaganda, Russian citizens themselves, to live in a distorted and hostile reality.