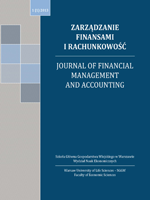 Summary/Abstract: The banking sector in developed economies for nearly a decade operates in an environment of low interest rates. This phenomenon is gradually transferred to the Polish banking sector. The paper analyzes the mechanism which forces the central banks to maintain low interest rates, and the results of their impact on the banks` earnings in 2008–2014. The study is based on the data published by the central banks of selected countries and Poland. The research shows that globalization, outsourcing of significant share of jobs, collecting savings and a lower inflationary pressure are major causes of low interest rates environmental in highly developed economies. Low interest rates in these countries have not lowered significantly the net interest margin in banks, as well as their overall profitability. Similar behaviour of banks can be observed in Poland during the period of cutting interest rates which has started from the fourth quarter of 2012.