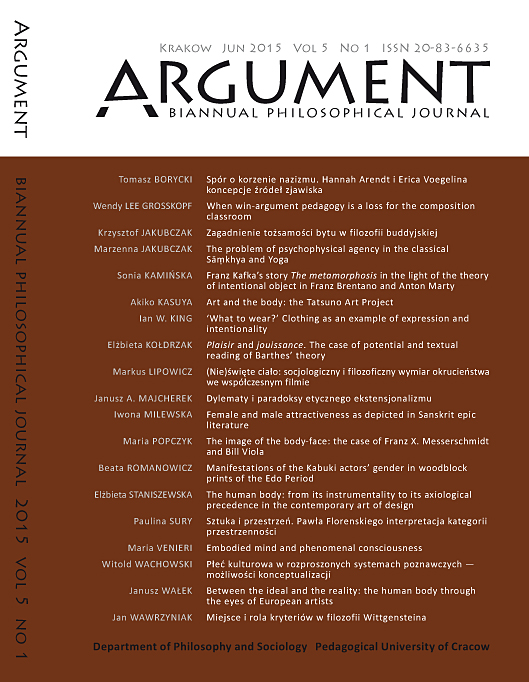 Summary/Abstract: The connection between Kabuki theatre and Japanese woodblock prints of the Edo period (1603 –1868), especially in their portraits of actors called yakusha‑e, offers an exceptional opportunity to analyse perceptions of the sex of the actor: as the hero of the drama, as well as the character performed on the stage. Both phenomena flourished in the Edo period and had a crucial impact on the visual art of the time, inspiring pictures of the Floating World (Jap. Ukiyo‑e). The images on Ukiyo‑e woodblock prints serve as a pretext for approaching the matter of whether to portray an actor as a performer (a man) or as the character performed by him (which could also be a woman, as in the case of the onnagata­actor). The author focuses on the actors’ identification with their own sex (only men appeared on the Kabuki stage) and on cases of breaking the convention between the real actor and his stage emploi. In the first part, the paper discusses the historical background of Kabuki theatre, which was invented by a woman (Izumono Okuni) and then after a few government edicts, was allowed to be performed on the stage only by adult men. Since the Kabuki tradition has successfully continued until today, apart from surveys of theatrical archives, the author supports her arguments by also referring to contemporary phenomena, especially the Kabuki performances she has watched in Japan (in such theatres as: Kabuki ‑za, Minami ‑za, the National theatre in tokyo, and Zenshin ‑za), and through interviews with actors and people of the theatre. In parallel, Ukiyo‑e images of the Edo period are studied, with core research from the National Museum in Kraków, Poland, and its collection of Japanese woodblock prints (including over 4600 original works from the Edo Period), and with special attention paid to the yakusha‑e portrait by utagawa Kuniyoshi.