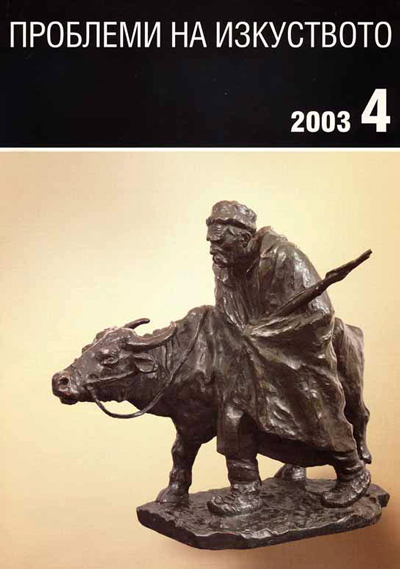 Summary/Abstract: In terms of gender studies and the history of women in art the author reproduces the biography of the entirely forgotten Russian artist Yulia Svechnikova-Belkovska (1874 - 1960) who came to Bulgaria with her husband Asen Belkovsky, her fellow-student from the Art School in Kazan, Russia, who was later to become a prominent artist. The article presents a thorough study of her life in Russia, Munich and Paris (1905 - 1906) until she finally settled down in Bulgaria (1907), as well as her life in the latter. Her life is closely related to her husband’s except for the academic schools attended by him only. Her artistic style is quite close to his, too: they share the same parallel development and eventually establish the style to be later named “Belkovsky". It contributes to the portrait and landscape painting, plenary sessions included, as well as the use of some impressionistic methods and a new modern approach to the sketch. The better use of the style, however, ​would be rather made by Asen Belkovsky as the more active and obliged one in a man’s world; Yulia Svechnikova would always remain in his shade. Still underdeveloped, the Bulgarian art marks the appearance of other women of artistic training; they were also married to Bulgarian artists, yet, in general, they didn’t aim at promotion and career in sacrifice to their husband's personal progress in a native environment. These women’s abandon of the ego and the neglect of talent could be characterized as the syndrome of the “echo-wife”, i.e., to deliberately mute one’s creativity and fully adopt the creative approach of the paragon as a man, husband and teacher, no matter of the equal good start of them both. This attitude isolates women and puts them in a marginal position at the beginning of XX century when women’s active creativity struggled for the recognition of not “essentially feminine art” only but rather to gain emancipation through the professional attributes of women’s art.