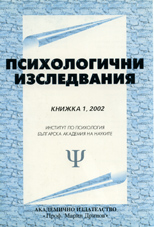 Summary/Abstract: The repression is the strongest defense mechanism, and it has different forms. We assume that some of these forms play the role of transitive phenomena, which have the trend of developing another defense mechanism — suppression. We have formulated the hypothesis that the suppression has an optional influence on the process of forgetting statements, which devalue the ego. The force of suppression and respectively the effect of forgetting depend on the possibilities of the negative moral messages, which sanction and are addressed to the ego. At the same time we have proved the hypothesis that the suppression is not always successful. That is why there is a parallel mechanism, which is being switched on — the cognitive distortion. The result of these processes is the synthesis of two synchronous mechanisms — the first one is consciously initiated, and the second one functions unconsciously.