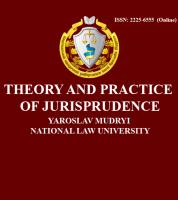 Summary/Abstract: The objective of the article by Shorokhova Yuliia Serhiivna «On theproblematic issues of determining the object of income tax» is highlighting theproblematic issues in defining corporate income tax. Analyzing scientific literature,examining the article of the scientists who studied these issues, studying relatedregulatory legal acts, all this was done to find the correct answer to the question ofdefining the object of income tax.Corporate income tax is one or even the main of budget-forming taxes, whichhas always played an important role in the development and functioning of the state.Therefore, when considering the corporate income tax it is necessary to examine oneof the key elements of the tax and corporate income tax - the object of taxation andthe object of taxable income. That is what we are doing in this article, because due tothis tax element the formation of revenues to the state treasury takes place.Upon considering the issue of the object of taxable corporate income tax therewere identified a number of important concepts, “the object of taxation”, “subject oftaxation”, “source of tax”. It is important for formulating a more precise definition of“the object of taxation” and then “the object of taxable income”.Art. 22 of the Tax Code of Ukraine (hereinafter the TC of Ukraine) states thatthe object of taxation may be property, goods, income (profit) or a part thereof,turnover from the sale of goods (works, services), transactions on the supply of goods(works, services) and other objects defined by the tax legislation, to the presence ofwhich the tax law reefers the emergence of a taxpayer's tax obligation.The author of the article having examined a large number of sources, concludesthat the science of tax law has different views on the definition of the subject and theobject of taxation, but scientists generally can be divided into two opposing groups.One of them belives that the object and subject of taxation should not be separatedand the others vice versa see a number of problems and give examples of theseproblems, if they are taken as a whole.Analyzing the experience of outstanding scientists of both ancient and moderntimes it becomes clear, making a comparative analysis of the laws of other countries,we agree with those scientists who focus their attention on the feasibility ofseparating these legal categories.To make a conclusion on the entire material reviewed by us, it should be notedimportantly, having examined the Ukrainian legislation, partly the legislation of someEuropean countries, having analyzed the works of outstanding scientists, it should benoted that a large number of scientists who were interested in the issue of “the objectof taxation” made a significant contribution to the science of tax law. Without theirwork relating this issue it was not possible develop legal instrumentarium andprovide the correct, substantial and clear definitions in the legislation. From theanalysis of the law is clear that the significant disadvantage of the Tax Code ofUkraine is the lack of definition of the object of taxable corporate income tax, andthere only the scheme of income calculation.