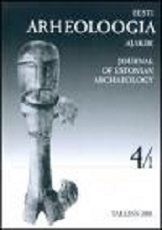 Summary/Abstract: From the occupation layer of settlement adjacent to Tartu fort, deposited at some point between the 7th to 9th centuries, a soil sample was taken. In addition to other finds, charred plant macrofossils were obtained. These consisted of eight taxa. Barley was the most common cereal. The second most numerous cereal was rye. Bread wheat and oat were minor components. Four peas and two broad beans were found in addition to the cereals. Three hazelnut fragments and one oak acorn were the only remains of collected plants. One grain remnant of Bromus sp. could not be identified to the species level. Previously reported plant remains from the Iron Age sites of Kuusalu, Iru, Rõuge, Otepää, Soontagana, Valjaja, Tartu fort, Tartu settlement, Aindu and Linnaluuste I were compared with the current material. According to the finds, barley was the most common cereal during the first millennium AD. Rye became common during the Late Iron Age. Two oat finds are significant, because they represent the first Iron Age finds of the crop in Estonia. It is not clear, however, whether oat was cultivated or a weed in Tartu during the 7th–9th centuries. Broad beans were found for the first time in Iron Age Estonia.