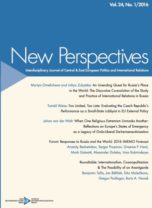 A Case of Europeanization?

Summary/Abstract: Estonia, Latvia and Lithuania have established themselves as ardent supporters of the EU’sEastern Partnership, and have also combined this with robust national policies. The crisisin Ukraine, with the annexation of Crimea and Russian military aggression precipitatingconfrontation in EU-Russia relations, presented the Baltic countries with the most formidablepolitical challenge since restoring independence. Combining Europeanization literaturewith Larsen’s (2005) approach to the foreign policy of small states, the article focuseson the relationship between national foreign policies of EU member states and the EuropeanUnion as a foreign policy platform. The analysis synthesizes the results of a contentanalysis of official press releases with interviews with the Baltic states’ diplomats. The empiricalresults show that in responding to the Ukraine crisis, the Baltic states have regularlypursued their policy aims through the EU, contesting the conventional notion that Europeanizationrarely extends to foreign and security affairs.More specifically, the Baltic states’handling of the Ukraine crisis suggests that Europeanization can affect even dossiers withheavy bearing on member states’ security and national sovereignty where – according tothe extant consensus in the literature – it should be least likely.