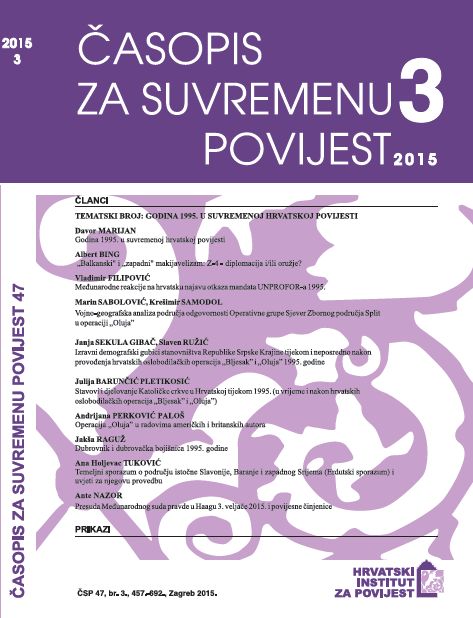 Summary/Abstract: The article deals with the genesis and the epilogue of one of the last attempts to resolve the problem of the occupation of Croatia through diplomatic channels on the eve of the military denouement in 1995. The initiative Z-4 (Zagreb four talks) was started in the direct talks between the Croatian President Franjo Tuđman and the US Ambassador to Croatia Peter Galbraith immediately after reaching the Washington Agreement in March 1994 (which cleared the path to closer Croatian-American cooperation and the future Dayton Agreement). Although it had never been achieved – given the new circumstances after the military intervention of Croatia in 1995, in the historical sense the diplomatic initiative Z-4 represents a significant political and diplomatic (inter)phase of an attempt to find a peaceful solution to the problem of reintegration of the occupied Croatian territory. As one of the basically American initiatives, Z-4 equally shows the controversial background of the US policy towards „the region“, the complex issues of political and military cooperation between Croatia and the US (which in the period from 1994 to 1995 became the backbone of the final outcome of the (post)Yugoslav „crisis“), that is to say, the positions of some of the most important factors in the international community. In the broader context, Z-4 has also been analysed as a historical document that expressed different value features of understanding of the political (re)organisation of Croatia, as well as the complex background of the real political premises of the Croatian and American policy, i.e. the forum of international community.