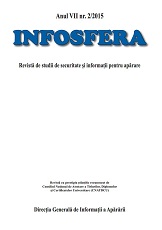 Summary/Abstract: The informational war encompasses media aggression and informational defense, these actions being done under the specialized institutions control, which are responsible only to their handler. Subversion, as a media war instrument, is now used more frequently, as recent developments confirm. The fighting methods are adapted to the type of weapon used in the confrontation: the information, the word, the image, making them diff cult to be identified by the majority of the targeted public, fact that amplified the persuading and dissuading effect.