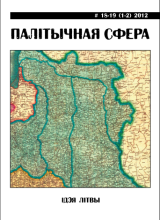 Summary/Abstract: Th e article focuses on the heritage of the Great Lithuania – cultural, religious, historical – as well as forms which it takes on the musical scene of contemporary Lithuania and Belarus. Th e author mentions the emerging of Balto-Slavic (Cryvian) segment of the Belarusian scene which proposes an alternative Belarusian national identity. Great Lithuanian heritage is examined through the prism of three archetypes. First, it is a warrior archetype, which most vividly manifested itself on the pagan metal scene. Second, it is a priest archetype, which fi nds its expression in the music of metal bands, as well as groups playing archaic, ritual folk. Th ird, it is a farmer archetype, represented in the music of a number of neo- and post-folk groups.