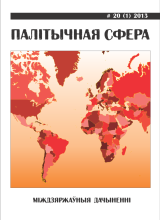 Summary/Abstract: Th is article deals with the “Czechoslovak” issue of the Hungarian foreign policy in 1918-1920 and particularly considers Hungarian attempts to retain control over Slovakia and Subcarpathian Rus (so called Upper Hungary/Felvidek). Despite the Czechoslovak occupation of these territories in December 1918 – June 1919, Budapest hoped to get them back and guaranteed an autonomy. At the same time Hungary sought support of Italy, Soviet Russia, Poland, Romania and France. Finally, when these attempts failed and Hungary signed the Trianon Peace Treaty (4 June 1920), Budapest tried to improve its relations with Prague. Th e article is based on Hungarian archive sources and newest historical works from Hungary, Slovakia and the Czech Republic.