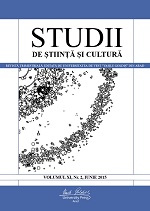 Summary/Abstract: An interesting poet and a ”case” of the lost generation is Dimitrie Stelaru. With an earlier literary debut than the other members of the generation, he adheres to the Albatros project and is one of the most significant poets of the new wave. A rebellious, defiant author, he affirms, in the Romanian literature of the fifth decade, the type of the bohemian and vagabond poet, with an illustrious ascendancy in the world poetry. From this position, his poetry is a protest to the world and a way of evasion in utopian territories, in chimerical spaces. Welcomed as a poet by Eugen Lovinescu himself, he is a genuine author, who makes proselytes in the fifth decade, and, later, in the generation of the sixties. A poet and a character on the stage of literature and life, an authentic bohemian, in terms of his own existence, an escapist spirit, creator of poetic utopias, Stelaru conceives a particular lyrical universe, that contributes to the raise of the new canon, for whom the poets of the lost generation militate.