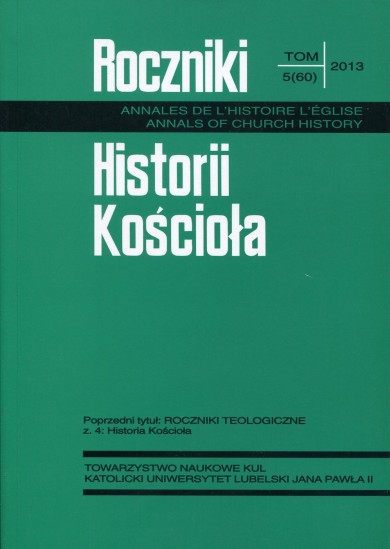 Summary/Abstract: This article deals with the pastoral activity of the Franciscan monks in Grodno from the time of the foundation of the monastery in 1635 until 1975.The patron Eustachy Kurcz bestowed the monks with resources that helped them survive numerous instances of historical turmoil and chaos. The time of the Partitions of Poland witnessed almost a complete demise of the Grodno monastery until 1906. When Poland regained independence, the pastoral vigour of the Grodno Franciscans was rekindled. Among the pastoral initiatives of the time, there was the publishing of Rycerz Niepokalanej [The Knight of the Immaculate Virgin Mary], so well-known for the editorial efforts of Maksymilian Kolbe, who in the years 1922-1927 worked in Grodno as a journalist and a priest. The death of Father Dionizy Klimczak, shot dead by the Nazi in 1943, marked the turbulent history of the monastery during War World II. The geopolitical shifts in the wake of the War caused it that Grodno was incorporated within the USSR. One of the most outstanding promoters of “Peace and Good” at that time was Father Arkadiusz Waltoś.