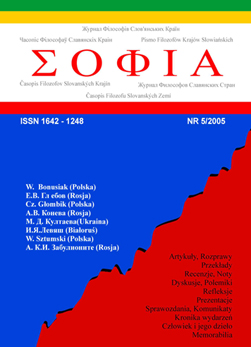 Summary/Abstract: The subject of the present article is the analysis of the main ideological assumptions of the founder of the Slavophil intellectual movement, Ivan Kireyevsky. In the article, one can read about the syncretic character of the Russian culture, which was described by Kireyevsky in "The European" - a magazine which he himself edited and published. According to Kireyevsky the truth can only be achieved through a comparative analysis of the intentions of the European and Russian spirits. At the same time, in his early works, he sympathizes with the Western culture presenting it as a model to be followed by the East.