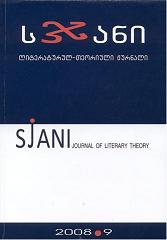 Summary/Abstract: Original Georgian dramaturgy starts with comedy genre. The aim of comedy is not simple, groundless laughter; but it is often mixed with tears, is useful and didactic. Laughter should not be transformed into chatting. Shortcomings are more productively disclosed in the form of comedy… Best Comedy writers – Menander, Plautus and Moliere made emphasis on the shortcomings of mankind. Getting acquainted with Moliere’s works is one of the most essential events of XIX century Georgian-French relations. “No foreign writer is as famous among Georgians as Moliere” was mentioned in Aleksadre Sarajishvili’s manuscript (A. Sarajishvili’s manuscript: Institute of Manuscripts, 372- 1:1). Moliere should be pointed out among European dramaturges, playing the most important role not only in the development of Georgian translational history of literature, but also in the evolution of comedy genre for Georgian theatre. It is enough to say that Giorgi Eristavi’s dramaturgy owes much to Moliere and on the second year after the foundation of Georgian theatre (1852) Moliere’s play – “The Physician in Spite of Himself” occupied its place in the repertoire of a theatre. The aim of comedy is to improve people with the help of laughter and not mockery. Laughter is one of the strongest tools for revealing shortcomings of mankind. This genre is especially close to the audience and raises no less important social issues than tragedy. G. Eristavi’s theatre follows this genre. Themes of Moliere’s comedy, satire, folklore, reflection of reality and revealing society’s shortcomings were close to the aim of Georgian realistic writing. Moliere expressed XVII century French society, Giorgi Eristavi - XIX century Georgian society. Shortcomings of Georgian nation are reflected in the plots of his comedies: clumsiness, sitting around, boasting, laziness and others. “If society watches comedy only for laughing and not studying, then it is of no use for such society”. (S. Meskhi. complete collection of works volume III. 1953: 120) Moliere and G. Eristavi have done great service; against the background of comic situation they created specimen in typical environments. In their comedies, laughter, as a form of satire, is good means for humans’ moral upbringing. “The Miser” /”Lavare”, Moliere showed this play in his theater in 1668, in Georgian it was translated as “krizhangi” (The Miser) in 1879, the translation was done by Petersburg University group of students , under the edition of Ivane Machabeli. Journal “Iveria” 1884 7/12 – under Arvitsashvili’s anonymous signature they staged Eristavi’s comedy “The Miser” in 1879, December 5/17 (Droeba” 254 1879). Comedy “The Miser” was first played in Tbilisi, in 1852, January 18/30, by the supervision of the author himself. The signature of this comedy is not reserved. It was first published as a separate book by G.Eristavi.