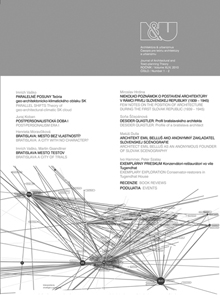 Summary/Abstract: Imro Vasko and Martin Gsandtner, creators and tutors of scholarly architectural research at the Laboratory of Architecture, Academy of Fine Arts and Design, in their thesis BRATISLAVA: A CITY OF TRIALS postulate an assumption of Bratislava’s unique character, which is anything but a prototype of a typical Central European city, both in historical and categorisation perspective. Ambivalent influences and a multitude of sources in the process of generation of its landscape from 19th through 21st century, complicate any explicit self-identification of the city. Architectural and construction momentum in the last decade prove the elusive genetic code of the city. Laboratory of Architecture presented a hypothesis that the genetic code of Bratislava rests in its perpetual testing. Higher structure of the city is being formed by its own subsystems, creating an environment of uncontrollable ties. Its heterogeneous appearance only confirms the theory of Bratislava as the city of trials. Leftist ideals of modernity with no context were crucial for Bratislava. The analytical phase of mapping Bratislava has been followed by testing of new strategies. Laboratory of Architecture came up with scholarly projects aimed at resolving the imminent future of Bratislava as an independent experiment to universalize the city character.