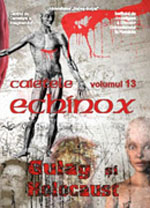 Summary/Abstract: This study analyzes the way in which the formation of a democratic memory was attempted within the Romanian society after 1989. In order to accomplish its goal, the paper analyzes both the issues related to a “trial of communism” and those related to assuming Romania’s responsibility in the Holocaust. The author upholds six theses concerning the construction of a democratic memory, according to which the problem of assuming the traumatic period 1938-1939 is studied. The author’s main conclusion is that in Romania efforts efforst have been made to construct a democratic memory, but that this memory functions in a selective manner.