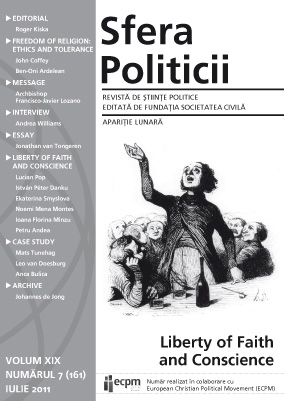 Summary/Abstract: The Moldovan Ministry of Justice proposed a new law to prevent and to fight against discrimination. The purpose of the proposed law was to create an instrument that allows the prevention of any kind of discrimination on Moldovan territory and to bring all the provisions together under one piece of legislation. However, because of the confusion at the Ministry of Justice about the goal of the new legislation, the proposed law became very controversial and it raised serious concerns about the freedom of faith and conscience. Nevertheless, active neo-liberal EU lobbyists and diplomats stated that this was the only way for the lifting of the visa barriers. Unjustified pressure from some official EU diplomats combined with a confused Ministry of Justice seemed to form the basis for a controversial law that brings fundamental freedoms in Moldova in serious danger.