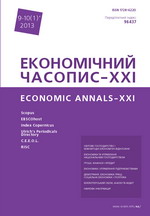 Summary/Abstract: Introduction. Social reproduction assumes the continuity of the process of reproduction and constant renewal of productive forces, capital, and perfection of relationships. It is considered according to five sectors of the Ukrainian economics (production of means of production, production of consumer goods, service infrastructure, forming of human capital and national government), which differ slightly from D. Bell’s model. The influence of the second law of reproduction in the modern Ukrainian economics attracts the particular attention. Results. Analysis of the reproductive processes of the second and third economical sectors means that the production of consumer goods and services cannot be considered as the demand for the foodstuff, consumer goods only, but for the services and the quota of accumulation in the population gains. Analysis of the dynamics made it possible to determine the level of the provision of the population effective demand and all economical sectors in foodstuff and consumer goods. It was mentioned that the process of the expanded reproduction of the country’s aggregate product required the sector of foodstuff and consumer goods production, sectors of services infrastructure for all the sectors of the economics to produce totally such a volume of production and services (the supply) that would totally provide the effective demand of the population and the need of the production of all the economical branches and the volume of capital accumulation given necessary for the investment. The calculation showed that during 2001-2010 the cost of the goods and all kinds of services produced by the second sector (production of the consumer goods) and the third sector (all kinds of services for the population) was totally covering the effective demand of the population. Thus, in 2010 the gross added value in the amount of UAH 868 billion spread on the demand for the consumer goods in the amount of UAH 679 billion and on the accumulations (investments) in the amount of UAH 859 billion. Conclusion. The research of the correlation between the gross added value and the product of the intermediate consumption of the second and third sectors of the economics in the five-sector model made it possible to submit several proposals concerning the their further innovation development, namely, the modernization in the second and third sectors of the Ukrainian economy, according to the program of providing of rapid economic growth, should be performed on the basis of modern technical and technological developments; as an additional source of the implementation of such policy in the period of crisis, parallel with the traditional methods of financial provision, it seems worthwhile to use the emissive mechanism of the «quantity extenuation» (QE), as the effective trend of the stimulation of the economical growth and satisfaction of the growing needs of the economics in the investment resource.