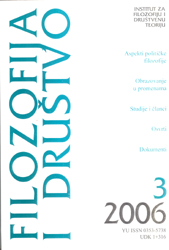 Summary/Abstract: Author consideing, appearing and existing modern idea about university like one of the most important institution knowledge which is arise in modern epoche. In this work particular attention will be instiated on consideries different ideas and conception university which were before so-called Himbolt's idea of university which has global disposition and which is in the last two centuries regardless on period of crisis, had dominant position in contemporary highschool education.. The secund part of work is consecrate on analysis constitute the first serbian university. In this part of work will be analyze different treatise and projects of university which are during 19. and on the begining of 20. century arise in circle of serbian intellectual elite in which are essentialy influence at form of institutionalty profil the first serbian university. The third part of work surroud there different phase of develop on university and university education in Serbia in XX and on the begining of XXI century. The first phase present the time between two war; the second phase is consecrate the time of and the third phase consecrate the last decade of XX and the first decade of XXI century in which are tempestuous changes in society announce newsearching and fundamental overguestioning the state in our highschool instution with primary target that thears work cordinate with standard of europien universitys and that way accomplish thears integration in net of european universities.

Večni mir i svetski građanski poredak Eternal Peace and World Citizen Order 2004 Filozof u masonskoj loži The Philosopher in a Freemasons' Lodge 2004 Stvaranje Beogradskog univerziteta i sporovi oko Teološkog fakulteta 1905 - 1920 The Founding of the University of Belgrade and the Controversy over the Faculty of Theology 2007 Jaspersov pokušaj rehabilitacije ideje univerziteta Jaspers’ Try of the Rehabilitation of the Idea of University 2009 Recenzije i prikazi Book reviews 2012
2020 © CEEOL. ALL Rights Reserved. Privacy Policy | Terms & Conditions of use
ICB - InterConsult Bulgaria ver.1.5.0616