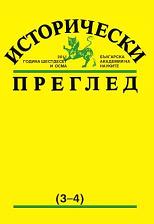 Summary/Abstract: The research is a first attempt for a relatively complete study on the contribution of Switzerland to the schooling of the Bulgarian intelligentsia with European education. That contribution was realized thanks to the Swiss universities, academies, higher and professional schools which educated Bulgarians in the period between 1878 and 1912. The author uses a considerable amount of primary sources. They were taken from: 1) the archival documentation of the legalization of diplomas from Swiss educational institutions (original diplomas and their copies and translations legalized in Bulgaria); 2) hundreds of nominal orders gazetted in Bulgaria for financial support granted to Bulgarians studying in Switzerland; and 3) research works of Bulgarian and foreign authors who have worked with archival documentation from the Swiss universities. On the basis of these sources a list was made containing the names; places of birth; places of study; specialities; year of graduation of 2024 Bulgarians who studied in Switzerland. The data from the list are systematized and thoroughly analyzed, and important general ascertainments, inferences and generalizations are made. The author finds out that the total numbers of the Bulgarians, who studied at Swiss universities, academies, higher and professional schools at that time were 2430. The choice of specialities reveals important priorities. Nearly half of the students . 45,7 per cent . decided to study law. Medicine is the second preference . 12,7 per cent of the students; and the third place is occupied by philologies . 9 per cent of the students, etc. Too few are those who studied in professional high schools. It can definitely be said that the contribution of Switzerland in the schooling of Bulgarian specialists with European education is almost entirely in the field of university specialities which included - formally or not . the higher engineering education in that country.